A number of natural plant oils have an insect repellency effect and have been used as such for many centuries.  The ‘natural’ aspect of these oils is very appealing and they can prove useful in protecting the wearer from biting flies.  Their very naturalness can have downsides, though, including a comparatively short duration of effectiveness and (because of the complexity and variability of the oil) a greater potential for an unwanted reaction than synthetic repellents.

Here are four natural oils which I think are probably the safest and the most effective for use to repel flies and midges:

Neem is a vegetable oil like rape seed or olive oil.  Like all vegetable oils it is a very complex mixture of compounds so is very variable in consistency, colour and smell depending upon its origin and how it is extracted.

Cold-pressed neem oil, obtained by crushing the seeds is the best method of extraction as it retains a higher concentration of the triterpenoids such as azadirachtin (which is the most helpful in terms of repellency).  Some of the neem oil imported from overseas is solvent extracted, which entails crushing seeds and leaves and mixing with a solvent such as hexane then washing out the solvent. This is a cheaper and less useful product.  I worry that some of the cheaper neem oil you get on eBay etc is a mixture of oils from both extraction methods.  Without a compositional analysis you have to take it on trust that the product you’re buying is exactly as described.  What is more, you won't get the same substance each time you source it, even from the same supplier.  Partly because of that, I wouldn't ever apply it neat on my horse.  Being a natural substance, it always contains impurities, any of which could set off an allergic response or irritate sensitive skin. (This is why we dilute neem oil to 1% in Biteback Neem Supreme and 8% in Neem Repel Gel.)  If using in greater concentrations I would advise a small patch test each time you buy a new batch even if you use the same supplier.  Any reputable supplier of natural oils should recommend this.

Many people ask how to apply it as it solidifies at room temperature.  I would avoid using detergents to liquefy it - washing up liquid is very harsh.  I would use a small amount of solid neem oil melted in a microwave then mixed with a very neutral oil such as light mineral oil (liquid paraffin/pig oil) or possibly almond oil.  It will always be messy to apply however, and you'll need to watch out for sunburn on sunny days.  The reason you need to mix it with something with little or no aroma is because the function of neem is to mask the smell of the wearer but if you throw in a potpourri of essential oils, you could be concocting something that is less effective and you don't really know why. One oil at a time is usually best I find. This applies to all natural repellents. 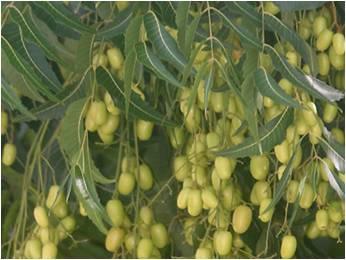 Neem oil will repel midges and other insects effectively so it is a useful weapon in our armoury against biting insects and ticks.  Its weak point, though, is endurance. The effect is not very long-lasting because, unlike synthetics which are custom-designed, the active repellents in the mix are volatile – they evaporate away and give maybe a couple of hours repellency at best.

To get a more enduring effect you need to go up-market to the only natural oil with a lasting effect – oil of lemon eucalyptus.  (Note that this is not the same as lemon eucalyptus oil which is used by aromatherapists and is not a useful repellent).  To obtain oil of lemon eucalyptus, the lemon eucalyptus oil must be refined and purified to increase the proportion of the active repellent component, p menthane 3,8 diol or PMD.  This makes it more akin to a synthetic repellent in that it is high in the active ingredient and low in unwanted impurities. However, it is still a natural product. There are only a few outlets in the UK where you can obtain the refined version and they have trademarked their product eg citriodiol and citrepel and so are very expensive.  As with most things, you get what you pay for – 7 or more hours of efficient repellency against midges and mosquitoes .  There are plenty of products around (eg Mosi-guard,  Care Plus) which contain this natural repellent but they tend to be pricey .  As far as I know, the only one which has been developed specifically using a combination of neem oil and citriodiol is Neem Repel Gel which has 8% citriodiol/citrepel and 8% neem oil.

Mention must be made of the humble bog myrtle.  This actually grows in the UK – unlike the Neem tree (India) and the Lemon Eucalyptus (Antipodes).  It is an essential oil – its essence is extracted by steam distillation which does mean that the repellent proportion of the mixture is fairly low. 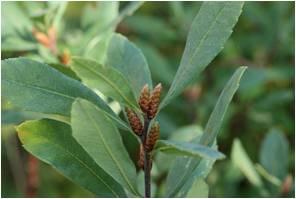 The plant itself has been used for centuries, and still is, as a mosquito and midge repellent. The essential oil is now recognized as an effective agent against insects (especially mosquitoes).  In a Scottish study*, volunteers allowed mosquitoes free access to their arms. Only one arm was covered with a gel with bog myrtle essential oil. After 10 minutes the protected arm had average of 1.6 stings, while the unprotected arm had 9.4 average stings.

The essential oil is very expensive to obtain as it has to be processed intensively to extract the small proportion of active repellent and, as with all essential oils, the duration is limited and the product must be re-applied frequently.  Having said that, its fragrance is so delicious that it is worth using on oneself for its dual properties as both a perfume and an insect repellent!  It does turn up as the main active in a few insect repellents, eg Stop-Bite, but is used in most products to enhance midge repellency.

Another essential oil which is receiving good reviews for repellency and safety is Lavandin.  Lavandin is a hybrid cross of true lavender and spike lavender. The aroma is similar to Lavender but less floral and more herbaceous

Lavandin Grosso variety has the most traditional Lavender scent which is evocative for many people and has the added use of being a useful repellent to many flying, biting insects.

2. Know each oil’s benefits and limits